Science dedicates its central pages to an article describing the work of Oriol Mitjà aimed at eradicating the disease.

Science is dedicating the cover and central pages of the current issue to Catalan research on yaws, specifically, the work that a team led by Oriol Mitjà has been carrying out for the last eight years on Lihir Island in Papua New Guinea. Dr Mitjà is a researcher at the Barcelona Institute for Global Health (ISGlobal), an institute supported by the ”la Caixa” Banking Foundation, who is working to eradicate yaws, a tropical disease that produces skin ulcers caused by infection with the bacteria Treponema pallidum pertenue. Until recently, it was known that this bacteria and Haemophilus ducreyi were the causative agents in approximately 60% of tropical ulcers, but the cause of the other 40% was unknown.

A recent study, carried out jointly by ISGlobal and the IrsiCaixa AIDS Research Institute, supported by the ”la Caixa” Foundation and the Generalitat de Catalunya, used innovative techniques based on analysis of the bacterial genome to identify three other bacteria that cause approximately one third of skin ulcers. The findings of that study, published in the journal Clinical Infectious Diseases, have opened the door to the development of more precise diagnostic and treatment tools. 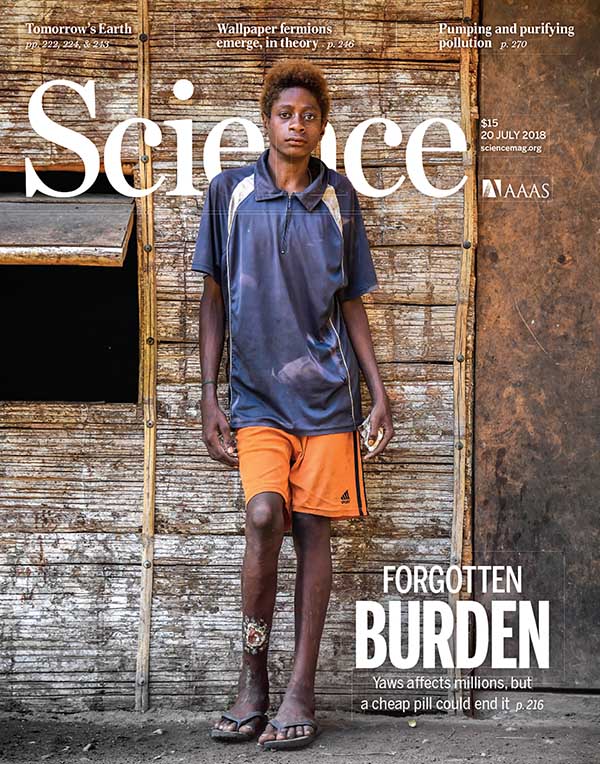 The tropical ulcer caused by yaws is the subject of the cover article in this week’s issue of the prestigious journal Science, which is dedicating its cover and central pages to the story of ISGlobal researcher Oriol Mitjà, who had never even heard of yaws when he arrived in Papua New Guinea in 2010. On observing that the disease affected most of the children on the island and caused untold suffering, he set about studying yaws.

The title of the article, “Slayer of Dragons”, highlights the courage shown by Mitjà’s team in the fight against yaws. As well as reviewing the most important scientific findings, the Science article also reveals the very human face of Orio Mitjà, a man who has had to overcome the inevitable obstacles involved in working in developing countries. The article closes with a reference to the ceremony at which Mitjà received the 2016 Catalan of the Year Award a few months ago and concludes by saying that while yaws is now very well known in Catalunya, in the wider world the disease is still almost as unknown as it was 8 years ago.

Together, the bacteria Treponema pallidum pertenue, which causes yaws, and Haemophilus ducreyi account for 60% of skin ulcers in humans. However, researchers observed that in one-third of people with such ulcers neither of these bacteria were found. To fill the knowledge gap, ISGlobal and IrsiCaixa undertook a joint study to identify the other bacteria that cause skin ulcers. The team analysed 122 samples of ulcers collected from children in Lihir between 2013 and 2014. Using mass sequencing techniques, they detected hundreds of different bacterial species, demonstrating the great microbial diversity in skin ulcers.

Of the bacteria identified, Haemophilus ducreyi was the most abundant, occurring in 23% of the samples; Treponema pallidum pertenue was found in 16%; Streptococcus dysgalactiae in 12%; Arcanobacterium haemolyticum in 8%; and Corynebacterium diphtheriae in 8%. “These findings confirm the complexity of the pathogenesis of tropical ulcers and provide us with information that will be important for the eradication of these infections,” explains Marc Noguera-Julián, one of the team of researchers in the Microbial Genomics Group at IrsiCaixa “They also evidence the fundamental role of mass sequencing techniques in the study of infectious diseases in the 21st century.”

Oriol Mitjà elaborates, “We are very close to identifying the entire spectrum of the bacteria that cause tropical ulcers in thousands of children living in rural areas and travellers to those areas.” The current lines of treatment being used in Papua New Guinea have shown that tropical ulcers can be treated effectively with amoxycillin. Since, amoxycillin is also effective against the three species of bacteria identified in the recent study, the current protocols are also appropriate for those lesions. Even so, identifying the pathogens that cause these lesions and gaining a better understanding of their role will facilitate the future development of more precise diagnostic methods and more effective treatments, thereby contributing to efforts to eradicate tropical ulcers worldwide.

A tale from my experience in rural Ghana
Camila González-Beiras has recently travelled to Ghana in the framework of the 'Lamp4Yaws' project in collaboration with LSHTM and funded by EDCTP. She tells her experience, equally challenging and humorous, in the second entry of our blog. Read More ›

Covid-19: Hydroxychloroquine—Nope, Still Not a Viable Treatment
This time it fails as a prophylaxis Read More ›